It started around 4:00 am, on warm early fall day. I was going back and forth in my head on if I should head out to the nearest Wildlife Management Area for a morning hunt. Part of me said “go for it” and the other part of questioned myself. I had a full schedule that day, but I decided to go out anyway. After contemplating a bit longer I decided to head out.

My excitement got the best of me; sitting out in the woods, hearing the wind in the trees, and knowing the excitement and exhilaration I’d feel, calling everyone that I’d finally killed my 1st deer, beckoned me to the woods. After pulling up, getting my camo on, and spraying down with scent killer I headed thru the field excited for a chance at my first deer!

While I was making my way across the field, for a fleeting moment I thought of turning back to get on with my full schedule, but the excitement and anticipation of success kept my feet moving toward the edge of the cut corn field. As I made my way to my spot I went down my mental check list; do I have my arrows? Check. Am I scent-free? Check. Do I have my phone? Check. I was prepared mentally and physically to finally kill my first deer! 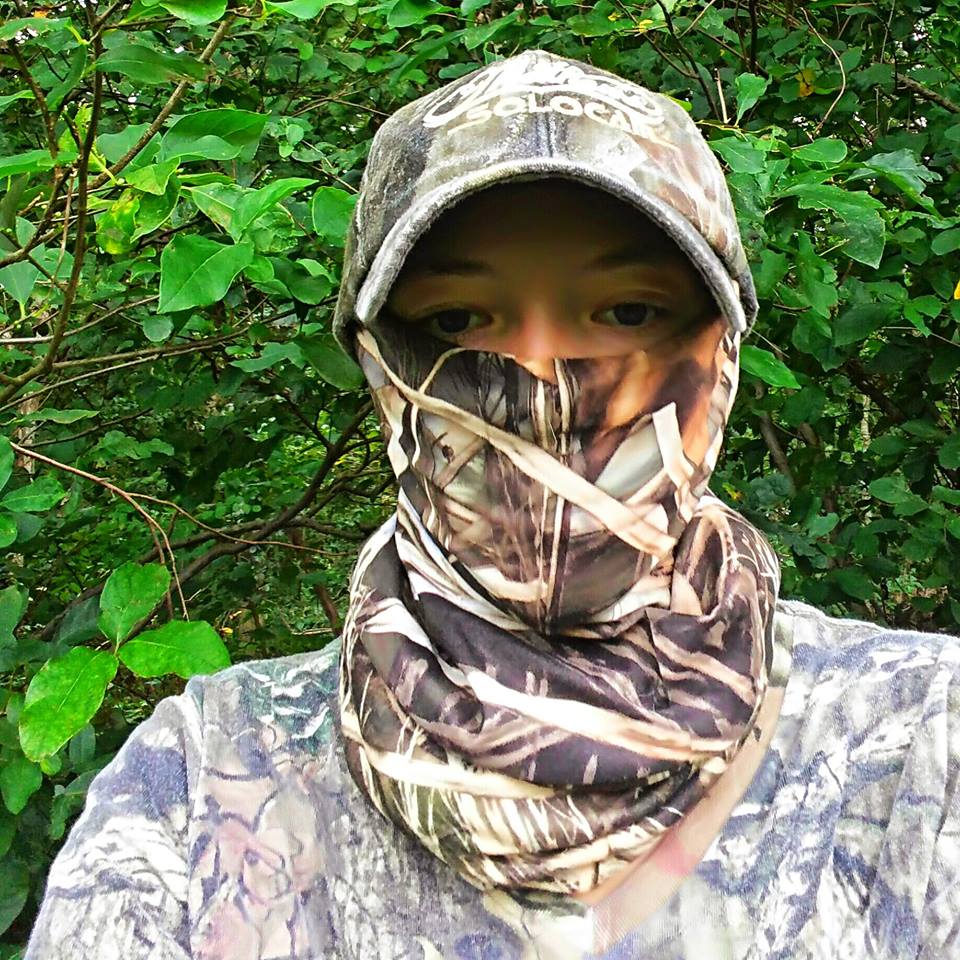 I chose to sit on the edge of a field near a cut-through where, thanks to pre-season scouting, I had seen deer enter the field. After sitting down at the base of a tree and range-finding various landmarks, I was ready for the deer to start moving. After about 30 minutes, I had a gut feeling that I was in the wrong place. So I grabbed my bow and slowly picked my way back down the trail I came in on, heading to a nearby pond.

That’s when I saw the deer on the other side of the field, just barely out of sight. Suddenly my determination to shoot my first deer overrode my nervousness. My heart started beating so hard, it felt like it was going to come out of my chest. I turned off the trail and crawled my way through the thick marsh grasses surrounding the pond on the corner of the field. I was sitting in water, the cold fall marsh leaking into my boot, and the mosquitos biting my face and hands.

As the sun rose and flooded the field with light, 40 yards away stood a small buck nibbling the fresh cut corn. I slowly looked around me and saw deer everywhere. I was surrounded by deer! There were does, fawns, and bucks of all sizes. I was so excited that I decided whichever deer gave me the first shot was the one I was going to take. 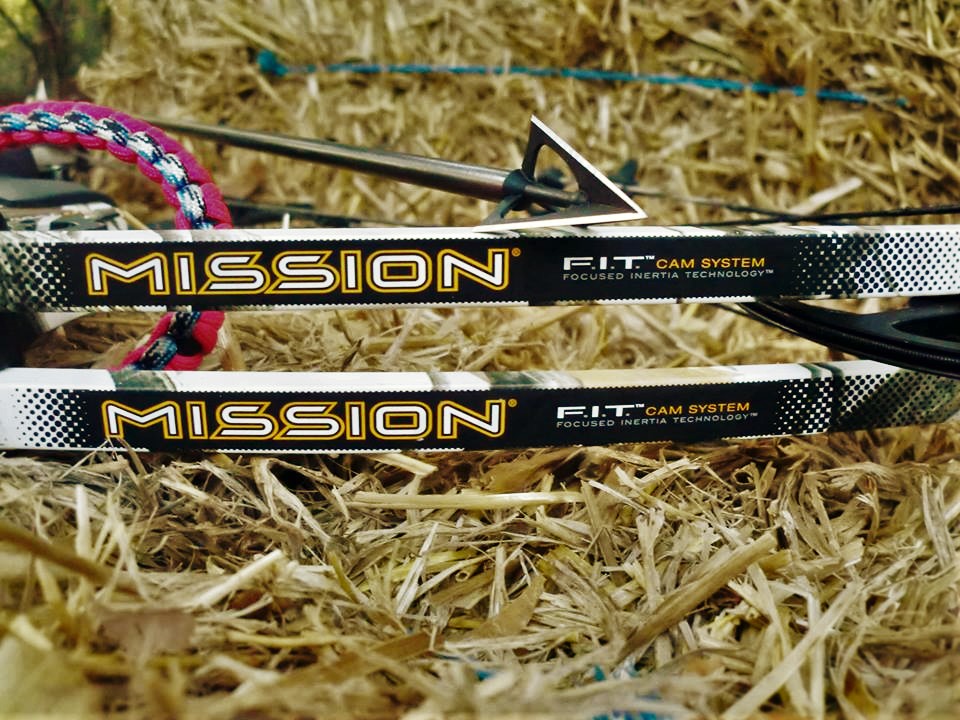 When I turned back to watch the small buck in front of me, there was a large, mature doe with a smaller doe following her. It seemed like they came out of nowhere! I inched my way closer to them, crawling through the cut corn, praying I wouldn’t get busted. The large doe walked closer to me and put her head down to graze on the corn. I chose that moment to get on my knees and draw my bow back.

In the mere seconds it took me to make that movement, she looked up at me, and I was terrified! She saw me! Did I just blow it? Can I make the shot?! I settled my breath, took aim, and pulled the trigger on my release. As soon as that arrow took flight, I knew my NAP HellRazor had found it’s mark! I sat still and watched that deer run off, my arrow still in her side. She did the famous mule kick as she disappeared into the woods. LUNG SHOT! I couldn’t believe it!

I waited to see if the other deer ran off so I wouldn’t scare them. No such luck, so I got up out of the marsh grass and started towards where I had shot my doe. No blood… I wandered towards where she had bolted into the woods and found the smallest drop of blood… and then another drop… and then a big spray of it all over a tree! After following the blood trail, I saw her laying there with my arrow lodged deep into her lung. 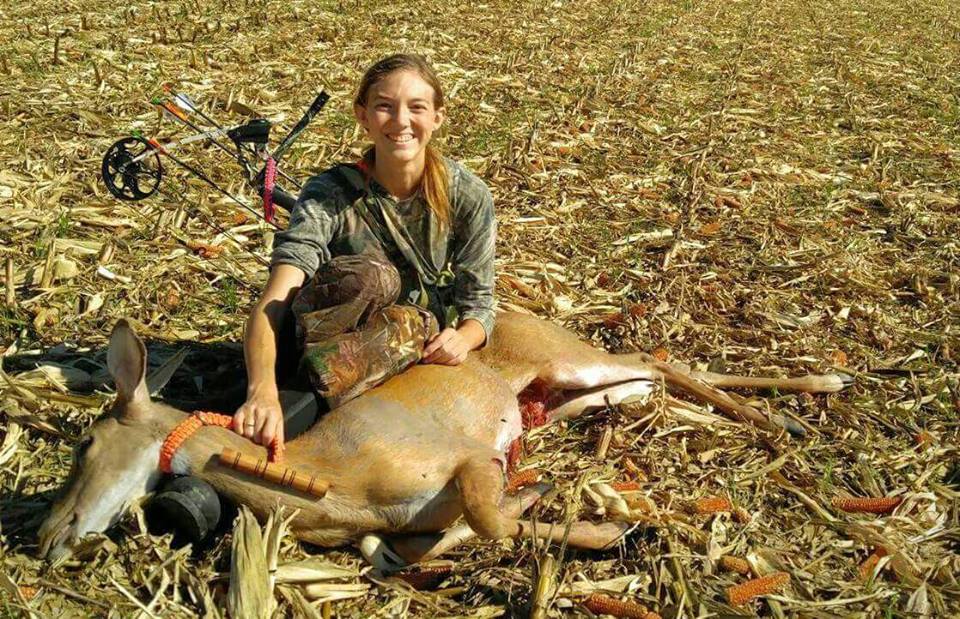 I had never field dressed a deer before so I made a call to my boyfriend, he congratulated me and walked me through the process of gutting a deer. As I dragged her from the woods, I still couldn’t believe I had done it. This doe was so heavy, that it took almost 2 hours to drag her from the woods to the truck, 200 yards away! I ended up calling for help to drag it the rest of the way. I then had to rush home, process it and then carry on with the rest of my day. But I’ll never forget my first deer!