The eastern newt is a member of the salamander family. They live mainly in forested areas near swamps and ponds in parts of eastern North America. Eastern newts are also known as red-spotted newts. They are most active during warmer months and are usually found looking for food along the edges of streams and ponds. Eastern newts eat aquatic insects, amphibian eggs, and other small invertebrates.

Adults are primarily aquatic while juveniles, called efts, are live on land. Efts are much smaller than adults and are brightly colored! These efts are hard to miss. Adults are olive or dark green as they transition to aquatic life. 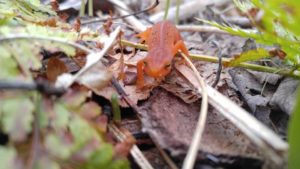 While efts are brightly colored and catch the attention of many predators, the color is meant to be a warning as their skin secrets a toxin when they are attacked. However, this does not stop them from being attacked by birds, insects, leeches, fish, and other amphibians.