I’ve pulled all my favorite deer jerky recipes together to create one master go-to list!

This recipe can be used for jerky made from strips cut from a steak or mixed into ground meat.

Dash of hot sauce of your choice

Marinate the meat for at least 1 hour.

Grind the meat and mix a packet of Eastman Outdoors Hickory seasoning & cure.

Load the mixture into a jerky gun and squeeze onto the trays to dehydrate. 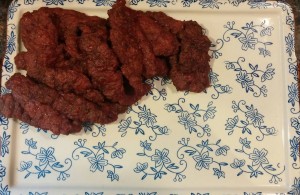 1 cup bourbon of your choice

Add all ingredients to a bowl and marinate the meat for 1 hour.

If you are using a smoker: Load into smoker on racks for 6-8 hours on 170 degrees

If you are using an oven: Lay strips on racks and bake on 160 degrees for 6-8 hours

Mix all ingredients in a bowl with the meat and marinate for 12-24 hours.

Pat the pieces dry on a paper towl and lay on racks.

Pat the pieces dry and lay on racks to put in the oven.